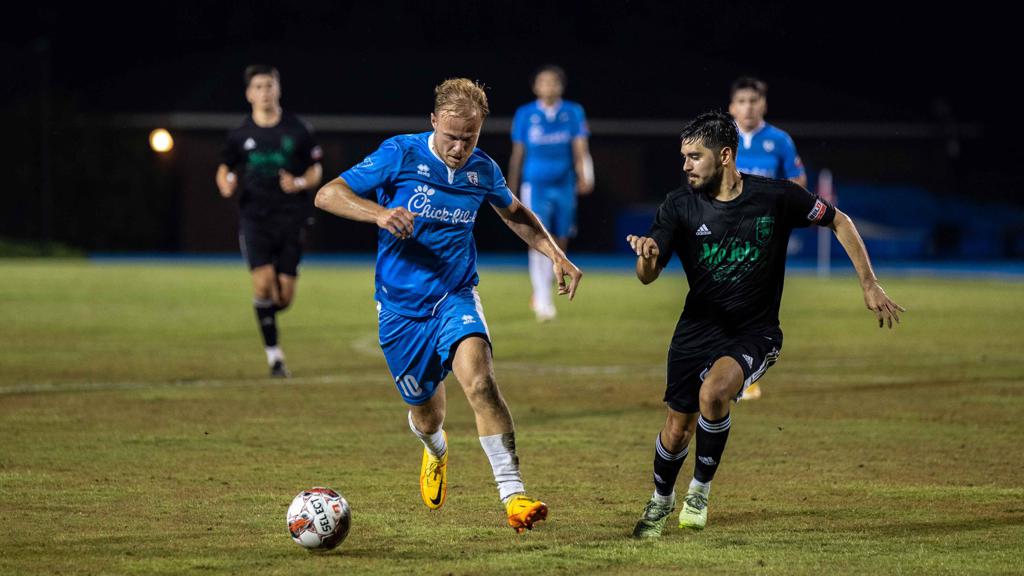 What a year it was. What a postseason we have coming up.

As the 2022 USL League Two Playoffs loom, we wanted to take a step back and celebrate everything that makes all 32 of our playoff-bound teams unique. They excelled on the pitch and in their communities, defining the true spirit of the #Path2Pro. Before Friday night’s kickoff, we’ll recount some of the greatest moments, facts, and stories from each of our 32 teams.

Lionsbridge FC, King of the Lions – Five teams in League Two have “Lions” in their name. Lionsbridge is one of two that made the playoffs and boasts the best record of those five. This is its first undefeated League Two season in club history, and it will prepare to host three more teams at Townebank Stadium this weekend.

Vermont Green FC, Turbo Tobin – 13-year pro and Vermont Green front office staff member Connor Tobin has been a fan favorite and vocal supporter of everything Vermont Green. A quick look at his Twitter profile will tell you exactly what “Turbo thinks”, but the lasting image from the season will be Tobin’s proud display of a bottle of maple syrup, which he chugged after Vermont Green qualified for the playoffs by defeating the Western Mass Pioneers.

Long Island Rough Riders, two-team dominance – Only one club has both its League Two and USL W League squad make the playoffs. The Rough Riders made the cut in both leagues and will hope their men’s team can carry the torch forward against a difficult Ocean City side.

Seacoast United, the Big Blue Wall – Seacoast United Phantoms allowed more than one goal in a game only three times, allowing a measly 0.92 goals-per game over the course of the season. Every time they allowed multiple goals this season was on the road. At Seacoast United Outdoor Complex, they allowed only 0.29 goals per match. United’s defense is rigid and intense and will be its calling card in the playoffs.

Christos FC, Stitz causing Fits – Ben Stitz may be the most productive player in League Two this season. With 15 goals and 12 assists to his name, he has the most goal contributions of anyone in the league. When he gets on the score sheet, Christos are 9-0-0. His name will be circled in bright red by Seacoast United coaches.

Manhattan SC, Long Island is NOT part of the city – Heading into their fifth regular season contest this season, Manhattan SC was 3-1-0 and had just conceded four goals to a Hudson Valley Hammers side that didn’t end up making the playoffs. They had 5-0-0 Long Island Rough Riders up next, boasting the best record in the league. In the 78th minute, Paolo Carroll turned the whole Metropolitan Division on its head, and Manhattan SC lost only one more time the rest of the season, taking the division.

NC Fusion U-23, Tournament Experienced – After advancing to last year’s League Two Playoff Final, where they ultimately fell to Des Moines Menace, NC Fusion U-23 went into the Open Cup and advanced farther than any other League Two side, losing in the Third Round in extra time to current second-placed USL League One side the Richmond Kickers. They’ll look to finish off a tournament run in 2022.

The Villages SC, new boot goofin’ – As reported by The Villages Daily Sun’s Drew Chaltry, Buffalos defender Vandyke Gyau had his cleats come apart in practice the day before they were set to play Miami AC for a spot in the playoffs. Founder and coach Anderson da Silva took Gyau to get new shoes after his shoes broke – Gyau used those new shoes to score in their decisive 3-0 victory.

Brazos Valley Cavalry, the Marvelous Mr. Stevenson – Ethan Stevenson failed to score in exactly zero Brazos Valley Cavalry games. 13 matches, 19 goals. He also never scored a hat-trick – but sported six braces. He is the constant threat up front for the Cavalry and will give Asheville City SC all they can handle.

Asheville City SC, Kan’t Stop Kemy – As Asheville City SC approached the end of the season, coming off a loss to One Knoxville SC, they needed a big performance to get them across the line and into the postseason. South Carolina United Bantams were coming to town, trying to string good results together. Enter Kemy Amiche, who scored at 17th, 39th, 58th, 87th and 92nd minutes. Five goals in a 7-1 win launched Amiche right into the Golden Boot race.

Nona FC, Mathias the Young – The youngest player in League Two plays for Nona FC, Mathias Rojas, celebrated his 14th birthday just before the start of the League Two season. He’s still a part of their active First Team roster, notching an appearance against The Villages SC and playing in the 2022 USL Academy Cup for the club. Nona is dominating right now, but they’re also building for the future.

One Knoxville SC, King Seba’s Comeback – In last year’s playoffs, as Des Moines was on track for its second League Two title, striker Sebastian Andreassen went down against Kalamazoo FC. As it turned out, he tore his ACL, and had to miss the next 10 months of action. He signed for One Knoxville SC in the offseason and was medically cleared to play just weeks before the season. He only played 32 minutes in his Knoxville debut but scored his first goal for the club in his second appearance, letting the emotion pour out of him. He is Knoxville’s leading scorer this season.

Texas United, Comeback Kings – In Texas United’s last five matches of their undefeated season, they trailed three times. Against LA Krewe twice, and Blue Goose SC at home, they gave the first goal of the match to the opponents before getting points out of every match. That steely resilience will come in handy as they head to Knoxville.

Des Moines Menace, back like they never left – As the defending champion, Des Moines has the longest active winning streak in League Two by default. Their last loss came on the road against Chicago FC United, on June 30, 2021. Their last playoff loss came against Flint City Bucks, the eventual champions, in the 2019 tournament. A very long streak is on the line, and the Menace have no interest in letting it go.

Kaw Valley FC, going global – Kaw Valley FC has one of the most diverse rosters in League Two, registering players from 18 different countries over the course of the season. These countries include Liberia, Jamaica, Ivory Coast and Switzerland, among many others.

Kalamazoo FC, late-game scorers – In over half of their matches, win or lose, Kalamazoo scored in the last 15 minutes of the match. In several of those cases, Kalamazoo scored after the 85th minute, including a last-second winner from Cyrus Harmon against AFC Ann Arbor on May 24 to get a grip on the Great Lakes Division. Kalamazoo FC loves to bring late fireworks.

Kings Hammer FC, a long way from home – Coming all the way from their Cincinnati base, Kings Hammer has the farthest travel distance for their playoff site among all the Central Conference teams. At 585 miles by road, their path to Des Moines takes them across time zones and across the entire width of Indiana and Illinois.

Chicago FC United, on top in the Windy City – Three League Two teams claimed Chicago as their home this season, including Chicago FC United. They went 5-0-1 against Chicago City FC and Chicago Dutch Lions, with a +20-goal difference in the six matches. That includes consecutive matches against Chicago Dutch Lions in which they scored 15 unanswered goals before allowing one in return at the end of June.

Peoria City, crossing parallel roads – As Peoria City gears up to play, they’ll get a word of encouragement from founder John Dorn. Chicago FC United will also get a text or a call from their founder – the same John Dorn. Dorn helped build both clubs to develop local talent and see them reach the greatest heights they can. Now, the two clubs will face each other in a Dorn Derby.

South Bend Lions, building a Coalition – South Bend Lions won the Valley Division by winning their final match 8-0, and supporters’ group 6 Districts Coalition was there every step of the way. Always making themselves heard, always ready to love their club fiercely, it’s hard to tell if the team or the supporters celebrated the division title more. Now they’ll make the trip to Flint to make the away environment a little friendlier for their team.

Flint City Bucks, the Elder Statesmen – Flint City Bucks’ record of four championships won’t be tied or broken these playoffs. The most championships any other playoff team has is two. It was an irregular season this year for Flint City, but they’re always dangerous come playoff time. They’ll have the home crowd behind them as they look for title number five.

Capital FC Atletico, burning bridges – Only one team handed Ballard FC a loss all season. Only one team handed Ballard FC TWO losses all season. Capital FC took down the Northwest newcomers with relative ease, winning both matches by two goals. They’ll have to maintain that dominance, should they meet Ballard again this postseason. Based on their regular season record, they’ll be feeling confident.

SF Glens, a meteoric rise – Before the two-season hiatus due to COVID-19, SF Glens had never made it to the playoffs, and never registered a positive goal differential. This season, they’re +19 on goals, and are sporting a 6-3-3 record as they head to the postseason. The Glens are still on the way up, and plan to keep going.

Ballard FC, with local flavor – Earlier in the season, Ballard FC wanted to honor local artist Ryan Henry Ward in the club. In the local Reuben’s Brews Taproom, a mural of Henry’s was up, depicting several characters sharing a drink and watching soccer. Ballard FC made a kit modeled after that mural, dubbed the “Henry Kit”, and sported it on May 30th, which they called the “Henry Game”.

Project 51O, the kids are alright – Project 51O boasts one of the youngest, if not the youngest, roster in League Two. Eight of their registered League Two players are under 18 years old – and they play! 15-year-old Javier Bedolla-Vera became the youngest USL Academy signing for Oakland Roots SC in the USL Championship back in June after showing out with Project 51O. Their impressive results despite their extreme youth throughout the roster shows how far ahead of their years the roster is.

Ventura County Fusion, razor thin margins – Ventura County has won two games by multiple goals this season. They’ve lost only one by multiple goals. Every one of their matches walks a tightrope, with a feeling of pressure heading into the 90th minute. There’s something to be said about Ventura’s results in the face of that – more often than not, they’ve come out with the win.

Flatirons Rush, the longest flight – For their conference quarterfinal round, Flatirons Rush must fly from the Denver area of Colorado all the way to Ventura, California – over 1,000 miles. That’s the farthest travel distance of any playoff team in this opening weekend. The mountain air in Colorado makes their visitors uneasy – they won’t mind a little discomfort.

Southern California Seahorses, spreading the wealth – the Seahorses had 12 different players contribute to goals, nobody with more than six combined goals and assists. Their rigid defense allowed more than one goal only four times, and more than two goals only twice. They only lost once over the course of the season, and that was away. As hosts of the Sunday matches in the Western Conference, that may turn out in their favor.

Playoffs start Friday afternoon, as Brazos Valley Cavalry takes on Asheville City SC, and Chicago FC United takes on Peoria City to kick off the playoffs at 4 p.m. ET. All playoff matches will be streamed on Eleven Sports.